How will regulation affect accountancy in 2019?

Protecting your business from cyber risks

Trends in merger and acquisition activity in Australia

Trends in merger and acquisition activity in Australia

Inbound mid-market merger and acquisition transactions in healthcare and technology sectors are predicted to grow in Australia this year, with historical and current trends showing the average transaction size for mid-market deals continued to significantly grow.

That’s according to William Buck’s 2019 Merger and Acquisition Report, which broke down the trends of all mid-market merger and acquisition (M&A) activity in Australia, over the last five years where a majority stake was purchased.

More than any other segment, mid-market transactions, ie those with a deal value between $10 to $250m, comprised almost half of the total volume of completed transactions in FY18 (47%), this was consistent in FY17 (48%) withthis trend appearing to be continuing in FY19.

Mark Calvetti, Director of Corporate Advisory at William Buck, says Australia’s economic outlook has made conditions favourable for foreign buyers and this along with growth in larger transactions, is set to continue.

“While the dollar may have weakened, Australia’s overall economy is strong and stable. It’s predicted that the Australian dollar will dip further in the coming year, and we’ll see foreign buyer demand continue – if not increase significantly.

Mark says this prediction is based on their findings, which showed a direct correlation between the fall in the Australian and American dollar and increased foreign buyers.

“William Buck’s report showed that the Australian dollar weakened by over 20% during the three years to FY16 from 93 cents to 75 cents, then stabilised in the 70-75 band. At the same time, merger and acquisition activity steadily increased from overseas buyers year-on-year, then stabilised with the dollar. With this trend, was also a demand for larger transaction sizes from overseas buyers.”

“This demand for larger transactions in the mid – market segment – those deals with a value of between $100m and $250m – makes business sense for foreign buyers who are looking to expand their businesses globally and are taking an interest in higher quality businesses that a developed country like Australia can offer,” says Mark.

The reports’ findings showed that the value of mid-market deals completed by foreign buyers over the last 5 financial years have been higher on average by 28% when compared with local buyers. Foreign buyers deals had an average transaction size of $68m compared to local buyers deals with an average transaction size of $53m, over the last 5 years to 30 June 2018.”

“What’s even more interesting is over the last five financial years, foreign buyers have been paying a significant premium of 24 % on mid-market deals with average EV/EBITDA multiples of 13.2x compared with about 10.6x paid by local buyers,” says Mark.

Mark says political factors across the globe highlighted some interesting trends, particularly in the U.K, China and the U.S.

“Access to debt in foreign buyers’ jurisdictions showed some stark changes. While Chinese investors had less access to debt, due to a curbing of risk by their banks, the U.S changes made by Trump made conditions more favourable,” says Mark.

“There was also a sharp decline in activity from the U.K, since FY16, as nervous investors take a ‘wait and watch’ approach to the Brexit negotiations, where they are experiencing considerable drops in both value and volume.”

According to Mark, the countries most active acquiring businesses in the mid-market were led by companies headquartered in the US and Singapore.

“Regulatory changes, such as restrictions on capital outflows and reduction in the debt of Chinese enterprises may mean Chinese investors have curbed their spending in Australia, however, demand from Singaporean and U.S investors had compensated for this slow-down,” says Mark. 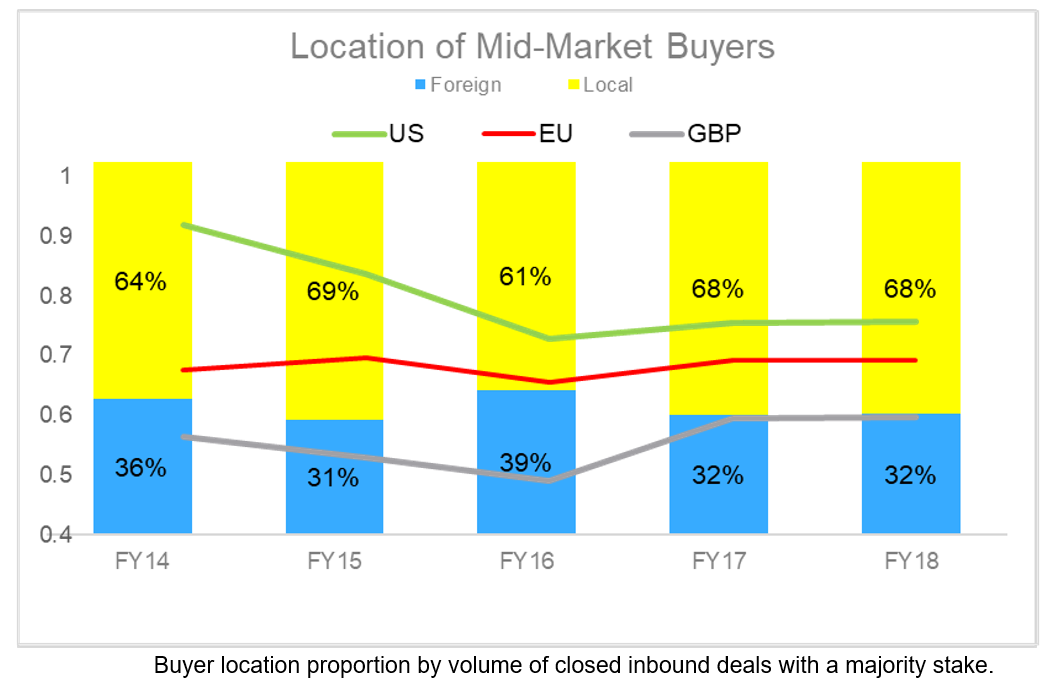 “Historically, Chinese mid-market purchasers have targeted deals in the real estate sector, peaking in FY15 with 10 real estate deals worth a total of $556m in deal value. While the capital inflow from China to Australian property has slowed in the past three years, trends show that, Singaporean and U.S investors buyer activity had increased, in both consumer discretionary and industrial business.”

Examples of consumer discretionary transactions include hotels and fashion businesses such as R.M. Williams and Seafolly.

Inbound activity by US companies in FY18 was spread across the real estate, consumer discretionary and industrial sectors. Examples of US transactions in consulting, construction and engineering include NYSE listed Jacobs acquisition of Acquenta and Nasdaq listed Tetra Tech, Inc’s. acquisition of Coffey International dominated industrial transactions.

Other notable deals were seen across the health sector with firms, looking to create synergies through vertical integration or drive their global expansion geographically.